Since Oct. 31 is just a few days away, we’ve included excerpts from Sandra Stearns book, “Cavendish Hillside Farm 1939 to 1957,” about her memories of Halloween at the Center Road School House.

Each year, the Center School had a Halloween party. Our greatest joy was to be invited to Cliff and Marion Johnson’s home to explore their attic looking for our attire. High button shoes, red flannelled long johns and dresses and hats from years ago were abundant there. Marion was always good for a unique costume herself. An unknown student always appeared and only by the process of elimination and observance of a missing person were we able to identify her.

Corks were burned and rubbed on our hands and faces to darken them. Lipstick was used liberally and we wore it for days before it washed off completely. Pillows were stuffed everywhere in our costumes making humped backs, roly-poly bellies, extreme fannies and bouncing cleavages. We wore our dads’ boots and shoes, the bigger the better. Our teacher, Mrs. Pickard, often dressed up as a gypsy and would tell our fortunes by the lines in our palms. Costumes were judged and prizes were awarded.

Apples were floated in a large tub of water and we bobbed for them. Faces were dunked under the water, trying to push the apple to the bottom, where we would be able to get it between our teeth and rise triumphant with our prize. The best way to snare the apple was that way, but much time was spent turning it into just the position you wanted. Usually it promptly rolled back whatever way it wanted as soon as your hands were eliminated from helping. Apples or donuts were suspended from the ceiling by strings. Our hands were tied behind our backs and we attempted to consume the dangling food as it swung back and forth. It was a neighborhood party and everyone, young and old, was involved.

The older students made a ghost walk outside, around the building. It was real dark so a rope was used to guide the “unsuspecting” parents thru our horrible moans, rattling chains, clanging pans, crazy cackles and wolf howls. The route and the noise never changed much from year to year, bout our loyal parents made our efforts worthwhile. They fulfilled their role of scared participants and we were delighted with their shrieks of fright!

One year we were invited to attend and participate in the large Halloween party at Duttonsville in the Town Hall. We had never been trick or treating and most of us were too bashful to try. I, for one, felt lost among all those unknown kids and did not enjoy myself. It was decided after that to continue our own party.

A special treat for the kids was our “Find the Right Shoe” game for the parents. Wives were taken out into the hall. They each removed the same shoe from their foot. These shoes were placed in the classroom in a pile. One at a time, our mothers would poke their foot around the door while keeping the rest of their body out of sight. The husbands had to decide if that was their wife’s foot, then pick out the right shoe and see if it fit. We were kept in stitches by how often our fathers couldn’t tell their wife’s foot, much less find the right shoe.

Another favorite contest was pie eating. Contestants of all ages were seated a table with their hands tied behind them. A piece of pie was placed on a plate in front of each one. Using only their mouths they gobbled and smeared pie from ear to ear as they tried to be the first to finish their piece. Of course blueberry was the chosen flavor because it showed up so nicely . Another contest was to see who could eat a whole pie in the same manner in the shortest time.

As we grew tired, cider and donuts were shared by everyone. Our high hopes for haunting had been fulfilled for another year.

Copies of "Cavendish Hillside Farm 1939 to 1957" are available from the Cavendish Historical Society for $15 a copy plus $5 for shipping and handling. Checks should be made payable to CHS and mailed to CHS, PO Box 472, Cavendish, VT 05142.
Posted by Margo Caulfield at 4:22 PM No comments: 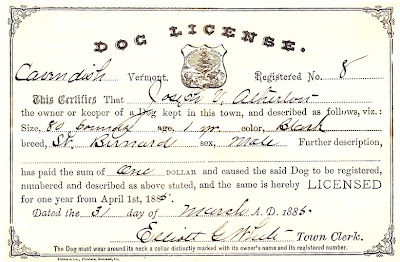 At the Cavendish 250th Anniversary Celebration on Oct. 8, Grand Marshall, historian and author Sandy Stearns read the following poem, which she wrote in 1990. It’s a very good summary of almost 250 years of Cavendish history.

Cavendish, Vermont! How I love that name!
Of my birth or death, perhaps both the same.
You felt the first step I did make.
May it be here, my last I take.
Your history spans so many years.
You’ve sheltered hopes, dreams and tears.
The Black River flowed thru the Gorge.
Thru channels and drops it did forge,
Now as it did in ages old.
Such memories it does enfold.
Quiet were your hills many years ago.
While wild animals roamed, to and fro.
Brave Indians traveled over your lands,
Fished your rivers, walked your sands.
Came in 1754 with prisoners from Fort # 4.
And “Captive” Johnson was born in a shelter poor.
Five years later your woods were filled,
With British soldiers cutting thru your hills.
The Crown Point Road connected fort with fort,
To move troops, baggage and supplies of all sort.
Chartered by Benning Wentworth in 1761,
But no permanent settlement was then begun.
John Coffeen and his family came to this barren land,
In 1769, alone, alone no neighbors at hand.
While sparse was the company on that road.
Settling his land, Leonard Proctor in 1780 came.
In the village that still bears hi name.
Next year Salmon Dutton arrived in town,
Built his house in the village he found.
Gradually, gradually, more settlers came,
Established homes, farmed and hunted game.
Established government, schools and a meeting place.
Utilized, organized, filled and divided the space.
Worked together to build a town,
Using whatever talents were found.
Grist mills, saw mills, carpenters too,
Farmers, blacksmiths, inns so new.
Place to congregate and for neighbors to meet,
Bridges, cemeteries, churches and streets.
All that was needed to make a town so fine.
Over the years they worked, now it’s yours and mine.
The railroad was a fabulous thing.
Its engine puffed and its wheels would sing,
Connecting Cavendish to the world so fine.
You could go almost anywhere by 1849.
The 1927 flood, what a tragic time.
A chasm grew down lower Main Street line.
Seven houses were crushed and swept away.
But everyone lived to see a better day.
Remember the lives that stood on these hills!
Remember the voices ringing in the valley shrill !
Remember the trials and cares to make it great!

Cavendish, Vermont! My Town!! My State!!
Posted by Margo Caulfield at 7:55 AM No comments:

Cavendish is offically 250 years old today. Oct 12, 1761 is the day King George III signed the Charter, which created Cavendish. Maybe eat some Old Cavendish Fruitcake or something
Posted by Margo Caulfield at 4:13 AM No comments: