A joint project of the Cavendish Historical Society and the Cavendish Baptist Church, local homeschoolers are working on building a "free mini pantry" that will be placed by the Church. CHS works with students of all ages to impart not only town history but to also teach the importance of stewardship for their community.

Containing non perishable items, it will be available to anyone in the community. The students have been hard at work designing the pantry, where to get building supplies, writing a letter for donations etc. If you have supplies (wooden cabinet), can help with the construction and/or are a homeschooling family that would like to help, please e-mail margocaulfield@icloud.com or call 802-226-7807.


Posted by Margo Caulfield at 6:37 AM No comments:

Cavendish Believe it or Not: Alexis St. Martin-Guinea Pig

The Cavendish Historical Society (CHS) is collecting strange tales of Cavendish. The story below comes from Linda Welch’s genealogical research. If you have a story you’d like to share, e-mail it to margocaulfield@icloud.com or by post to CHS, PO Box 472, Cavendish, VT 015142

Alexis St. Martin lived in Cavendish from about 1870 until close to 1879. Listed as a farmer in the census, it’s unclear if people knew his strange tale of being to the field of gastroenterology what Phineas Gage was to the field of brain injury.

In1822, St. Martin, aged 28 , was working for the American Fur Company as a voyageur- a rower of the big cargo canoes and responsible for portaging over land when it wasn’t possible to travel by water. On the morning of June 6 he was standing in the company store, when he was accidentally injured by a shotgun blast. The muzzle was "not over three feet from him --I think not more than two," according to an eyewitness. The whole charge entered the side of St. Martin's chest. 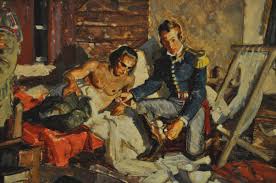 Mackinac Island, where the accident occurred, was home to a US Army fort, and so an Army surgeon, Dr. William Beaumont, came to his aid. As Beaumont wrote 12 years later, "The wound was received just under the left breast, and supposed, at the time, to have been mortal. A large portion of the side was blown off, the ribs fractured and openings made into the cavities of the chest and abdomen, through which protruded portions of the lungs and stomach, much lacerated and burnt, exhibiting altogether an appalling and hopeless case. The diaphragm was lacerated and a perforation made directly into the cavity of the stomach, through which breakfast food was escaping [when Beaumont arrived at the scene]."

Not only did St. Martin live, but he became the guinea pig for Beaumont’s many medical experiments for the next 10 years. The hole in the stomach had attached itself to the hole in the side of St. Martin's body, forming a permanent gastric fistula. Consequently, whenever he took off the dressing, his last meal would pour out.

According to an article Beaumont published in The American Medical Recorder in 1825, "This case affords a most excellent opportunity of experimenting upon the gastric fluids, and the process of digestion. It would give no pain, nor cause the least uneasiness, to extract a gill of fluid every two or three days, for it frequently flows out spontaneously in considerable quantities; and one might introduce various digestible substances into the stomach, and easily examine them during the whole process of digestion. I may, therefor, be able hereafter to give some interesting experiments on these subjects."

Beaumont never repaired the hole in St. Martin’s body and even requested governmental support for his research. The doctor never questioned his own ethics. He simply raved, for the rest of his life, about the wonders that he and other researchers would find inside the magic hole in Alexis St. Martin. From the experiments he performed on this man, he gained enormous prestige as a leading physiologist and a permanent place in the history of human research.

While St. Martin did eventually escape from Beaumont and his experiments, he married and had children. However, due to money issues, he would periodically reconnect with Beaumont for more medical experimentation.

In 1833, Beaumont published his book, Experiments and Observations on the Gastric Juice and the Physiology of Digestion. This contains some 240 experiments, all performed in the same famous stomach and earning the Army Surgeon considerable prestige. It included diet tables that were used as authoritative texts for almost a century. His work with St. Martin proved that digestion was a chemical process, ending a debate on this matter, which dated from the earliest annals of medicine.

Beaumont died in April 1853 from brain injuries suffered when he fell on ice-covered steps. 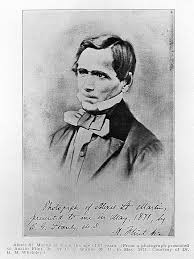 St. Martin’s life was not an easy one as he hooked up with a charlatan snake oil salesman. By 1870, St. Martin and his family were living in Cavendish, Vermont. He supposedly earned his living by "chopping wood by the cord." His four surviving children, all adults, were married and living with him, with a number listed in the census as being mill workers. They may have come to work in the Fitton Mill, which opened in 1867 and burned in 1875 or the Proctorsville Mill which was also operational until the panic of 1873-74.

In 1879 he had returned to Canada. Judge Baby of the town of Joliette (near Berthier), wrote of St. Martin’s last years as follows:

"When I came to know St. Martin it must have been a few years before his death. A lawsuit brought him to my office here in Joliette. I was seized with his interests; he came to my office a good many times, during which visits he spoke to me at great length of his former life, how his wound had been caused, his peregrinations through Europe and the United States, etc.. He showed me his wound. He complained bitterly of some doctors who had awfully misused him, and had kind words for others.

He had made considerable money during his tours, but he had expended and thrown it all away in a frolicsome way, especially in the old country. When I came across him he was rather poor, living on a small, scanty farm in St. Thomas, and very much addicted to drink, almost a drunkard one might say. He was a tall, lean man, with a very dark complexion, and appeared to me then of a morose disposition."

Alexis St. Martin died at St. Thomas de Joliette, Quebec on June 24, 1880. His family purposely left his body out to decompose in the sun before burying him in an unmarked grave—eight feet deep with rocks on the casket—all to keep the curious from exhuming it.

Michigan’s Other Side: Alexis St. Martin: The Man with a Hole in his Stomach.

Posted by Margo Caulfield at 12:35 PM No comments:

While many people now read the CHS newsletter, Scribble II on-line, the printing of the fall Scribbler II  was delayed in order to include information about Carmine Guica's passing. However, there was an a second delay due to the printer so the fall newsletter is being mailed the first week in January. The best laid plans......

WHAT’S NEW
School Program: As part of their unit on other cultures, on Dec. 2, one of the archeologists we’re working with on the dig in West Haven, VT, spoke to the 5th grade students about Mayan ball courts. Ellie Moriarity and her husband Matt excavated a ball court in Guatemala, which was Matt’s doctoral dissertation.

The 6th graders did an amazing job making poppies for Carmine Guica’s funeral. Some of the homeschoolers helped with the set up and decorating the hall for the reception following the service. For pictures of this activity, see the album “Poppy Making.”

Just prior to the holidays, the CHS had a daylong workshop as part of its Young Historians Program featuring the cultures of people who have helped to shape the town of Cavendish. This year, on Dec. 14,  we celebrated people who have come to our town from Mexico, Guatemala, El Salvador and other South American countries.

Thank you to the CHS volunteers, without which this would not have been possible: Angela Asermely, Margo Caulfield, Bob Naess, Peggy Svec, and Etienne and Pang Ting. A special thank you to Carmine Guica. It was the sale of his autobiography that provided the funds for the piñata contents. For pictures and more information on each classes activities see the Cavendish Facebook Album  “South of the Border.”

Solzhenitsyn Book: Speaking engagements on Alkesandr Solzhenitsyn: The Writer Who Changed History are being well received and definitely help with book sales. If you are interested in arranging for a talk call 802-226-7807 or e-mail margocaulfield@icloud.com

Cavendish Historic Timeline: CHS has updated the Cavendish Historic Timeline for 2016 including such events as the pending retirement of Cavendish Town Manager Rich Svec, the opening of Cavendish’s first winery and tasting room, the expansion of high speed Internet into the eastern part of town and the appointment of Karlene Glidden as the first female to achieve life membership in the Proctorsville Volunteer Fire Dept.

Sunflower Project: In thanks to those contributing to CHS’s annual appeal campaign, and in honor of Carmine Guica, we have been sending out sunflower seed packets for late spring planting. Given Carmine’s love of gardens and his incredible positive attitude, we thought seeing sunflowers all over town this coming summer would be a lovely way to remember him. If you would like a packet of seeds, please send a donation of any amount to CHS, PO Box 472, Cavendish, VT 05142.

WE NEED YOUR INPUT

How To Remember Carmine? The CHS board has been discussing various ways to remember and honor Carmine Guica for his considerable contribution to both the society and the town. Because of his love of children, we thought about renaming the Young Historians program, the Carmine Guica Historians program and raising funds to expand the program, including a unit on genealogy. Other suggestions include: a fund for students who wish to study some aspect of Cavendish history; college scholarship assistance for a Cavendish student interested in pursuing a degree in history; specific renovations at the Museum and/or Stone Church. Please let us know what you think would be the best tribute as we are open to any and all suggestions

WHAT’S COMING UP
January is the time for completing end of year reports, filing taxes and speaking with the Select Board about budgets for CHS in the coming year. We will begin working with the 6th graders at CTES and LPCTV to record some of the Cavendish ghost stories the students have been gathering. Speaking engagements are also being schedule on the Solzhenitsyn project.

• It may seem far off by we’re already thinking about the Annual Plant Sale, which will be July 2 (Saturday). Do you have plants you like to contribute? Are their plants you’d like to see us carry this year? Other suggestions?

• CHS is looking for new board members as well as volunteers who can help with various activities.
Posted by Margo Caulfield at 7:33 AM No comments: