CHS Sponsors A Dickens of a Christmas 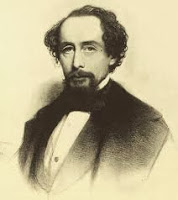 Charles Dicken’s, the author of "A Christmas Carol," embraced what he called his Carol Philosophy, - "a good time: a kind, forgiving, charitable, pleasant time: the only time I know of in the long calendar of the year, when men and women seem by one consent to open their shut-up hearts freely, and to think of other people below them as if they really were fellow-passengers to the grave, and not another race of creatures bound on other journeys." With this idea, is it not surprising that his writing, combined with the reign of Queen Victoria, helped to ignite many of the Christmas traditions we celebrate today.

As part of several Cavendish Historical Society (CHS) projects (Young Historians, Hands on History and Honoring Our Heritage) we will be offering a series of workshops at the Cavendish Town Elementary School (CTES) in December- “A Dickens of a Christmas.”

This theme was chosen as many of the people who came to Cavendish in the 1800s were English; the origins of many of our Christmas traditions stem from the Victorian era; and the children were the ones who would start preparing months in advance for the holiday, making many of the ornaments for the tree.

Each grade will be doing something different: gilding pine cones, creating fortune walnuts, cornucopias,  and paper flowers and collecting greens from school property for swags and center pieces.

If you have items to donate, they can be dropped off at the school office, or bring them to the CHS booth at the Nov. 30 Holiday Fair (Saturday), which is from 9-3 at CTES. If you would like to help with the various workshops, please call 802-226-7807 or e-mail margoc@tds.net

Below are resources to help you learn more about the Victorian Christmas.

• The Victorian House: The extent and type of decorations would have depended on income and the year (the era lasted from 1837 to 1901). While the Royal family’s tree was resplendent with lots of bows, ribbons, and lush ornaments, the average family tree would have reflected the talents of the children of the family, what was available in Mom’s scrap basket and what grew in the area. With the advent of the industrial age, glass ornaments became popular and fairly affordable for families, still their trees would have contained paper chains, garlands of popcorn and holly berries, cornucopias made from heavy paper, painted pine cones and the traditional gilded walnuts. The latter were opened on New Year’s Day to yield a fortune.

Wreaths, swags and centerpieces made from local greens, fruit, nuts, bows and whatever else was available adorned the various rooms in the house. While small presents were hung on the tree, the gift was the Christmas feast itself.

• Christmas in New England: It is unclear how the first settlers in Cavendish celebrated Christmas in the late 1700’s. Puritans and Calvinists did not observe Christmas-thinking it was too close to the Catholic pageantry they wanted to avoid or too much like the Druids. However, the earliest settlers of our town were Baptist and Universalists. The latter group celebrated Christmas at this time. Some Baptists of that era would have celebrated in manners similar to the Universalists and others would have viewed it as a day of prayer and fasting. In 1659 Christmas was banned in Massachusetts. With new arrivals from Europe, particularly England, the ban was lifted in 1681 but it wasn’t until 1865 that Christmas was made an “official holiday in New England. There are interesting accounts of conflicts of Irish and Catholic people in New England who wanted Christmas Day off, but their employers thought otherwise.
It is interesting to note that “A Night Before Christmas” was first published in 1823 in Troy, NY. This poem, which provided America with its idea of Santa Claus, was heavily based on the Dutch traditions of that era.
- 18th Century Christmas Traditions

• Make Your Own Victorian Christmas: This BBC series includes activities, history, and links to their series “The Victorian Farm at Christmas.” 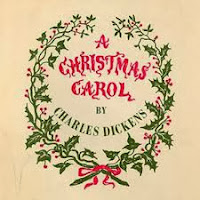 • First Christmas Card: The first card was sent in 1843, when Sir Henry Cole decided he was too busy to write individual Christmas greetings. He had his friend, the painter John Horsley, design a card that he could mail instead. Learn more at http://mentalfloss.com/article/26650/first-christmas-card-was-sent-1843

• Games were very popular during the Victorian era. After Christmas dinner, the family would often play a variety of different games. Check the following resources:
-       Victorian Parlour Games 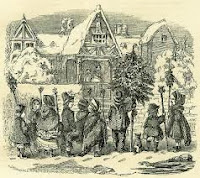 • Caroling: The Victorian era saw the revival of the medieval tradition of caroling. Many of our carols come from this era including "O Little Town of Bethlehem", "Good Christian Men Rejoice", "Silent Night", "It Came Upon a Midnight Clear", "Away in a Manger", "We Three King,” "Jingle Bells," and “I Heard the Bells on Christmas Day.”


Posted by Margo Caulfield at 7:08 AM No comments:

150th Anniversary of the Gettysburg Address/Cavendish in the Civil War 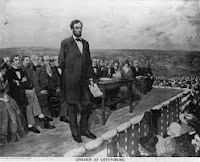 Following the July 1-3, 1863 Battle of Gettysburg, reburial of Union soldiers began on Oct. 17 of that year. The committee for the Nov. 19 Consecration of the National Cemetery of Gettysburg invited President Lincoln to speak. Lincoln’s address was so short, it was not possible for the camera’s of that day to capture a picture.

While Lincoln viewed the address as a “flat-failure,” and it received few favorable comments in the following days,  the speaker who spoke for two hours before the President, Edward Everett, grasped the significance of the speech. Everett wrote to Lincoln, “"I should be glad if I could flatter myself that I came as near to the central idea of this occasion in two hours as you did in two minutes."

Contrary to legend, Lincoln did not write the speech on the train to Gettysburg, but rather had been working on it for some time. In fact, he was kept so busy on the train, it would have been impossible for him to write it.

Throughout the trip, the President said he didn’t feel well. His complexion was poor and, as it turned out, Lincoln had a mild case of small pox. His valet William Johnson, also came down with the same illness on the trip, but unlike the President, he died from it.


Four score and seven years ago our fathers brought forth on this continent, a new nation, conceived in Liberty, and dedicated to the proposition that all men are created equal.

Now we are engaged in a great civil war, testing whether that nation, or any nation so conceived and so dedicated, can long endure. We are met on a great battle-field of that war. We have come to dedicate a portion of that field, as a final resting place for those who here gave their lives that that nation might live. It is altogether fitting and proper that we should do this.

But, in a larger sense, we can not dedicate -- we can not consecrate -- we can not hallow -- this ground. The brave men, living and dead, who struggled here, have consecrated it, far above our poor power to add or detract. The world will little note, nor long remember what we say here, but it can never forget what they did here. It is for us the living, rather, to be dedicated here to the unfinished work which they who fought here have thus far so nobly advanced. It is rather for us to be here dedicated to the great task remaining before us -- that from these honored dead we take increased devotion to that cause for which they gave the last full measure of devotion -- that we here highly resolve that these dead shall not have died in vain -- that this nation, under God, shall have a new birth of freedom -- and that government of the people, by the people, for the people, shall not perish from the earth.

Take the time to read the Cavendish War Memorial in front of the Cavendish Historical Society Museum and you will see that the town provided 187 volunteers to the Union, a number of which were at Gettysburg .

In the History of Windsor County, edited by Lewis Cass Aldrich and Frank R. Holmes, 1891, the following account is given of Cavendish during this war:

- In the War of the Union. — The first action taken by the town in reference to the late civil war was at a town meeting held April 30, 1861, Governor Ryland Fletcher presiding. It was then voted to raise $2,000 to liquidate all obligations incurred by Captain Tuttle in raising the Cavendish Light Infantry, and to pay the board of the men and furnish support to their families. Another loan of $3,000 was authorized in August, 1862, to pay bounties for nine months' volunteers, and in November of the following year a bounty of $200 was offered for volunteers, which was subsequently increased to $300, and another loan of $4,000 negotiated. During the latter part of 1863 the bounty was increased to $500, to make it possible to fill the town quota, and the selectmen were authorized to raise $10,000 to pay the expense of future calls for volunteers. In January, 1865, another loan of $7,000 was made, and in 1867 $15,000 was borrowed to pay the balance of the war debt. From a compilation made by the Hon. Calvin French we give the following figures : Cavendish furnished to the armies of the Union twenty men in response to the first call for troops for three months' service. In the Second, Eleventh, Fourth, Seventh aud Fifth Vermont Regiments, forty-two men for three years' service. These volunteers received no bounties Forty-two men were furnished under the nine months call. For subsequent calls fifty-three men were furnished for three years, and thirty for one year, making a grand total of 187 volunteers furnished by the town, whose terms of service would amount to 3521^ years for one man. Of these 125 volunteers received bounties amounting to $43,550, the others being recruited before it was necessary to offer a bounty. As early as 1867 a movement was inaugurated to erect a soldiers' monument in Cavendish, but it was not successful. In May, 1883, the present secretary of war, Redfield Proctor, presented his native town with a fine white marble monument, suitably inscribed and surmounted with an eagle. The town at this time appropriated $1,000 to grade the lot and pay the expense of the dedication of the monument. 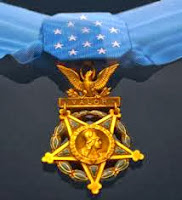 For a small town, it is remarkable that Cavendish had three men receive the Congressional Medal of Honor for their service during the war- Tom Seaver, William Sperry and Daniel Davis Wheeler.


Posted by Margo Caulfield at 5:40 AM No comments: