Upcoming Events
The Cavendish Historical Society (CHS) Museum is open on Sunday, 2-4 pm, until October 12. Appointments can be made at other times using the contact information above.

Screenings of “Freedom & Unity: The Vermont Movie” continue with the showing of the last two parts of this series in August. This is a first-of-its kind collaborative documentary film series, created by a group of critically acclaimed Vermont filmmakers. 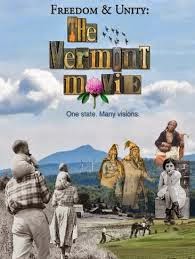 August 10 (Sunday): Part 5: Ceres’ Children: Screening  begins at 2 pm. Part Five takes a deeper look at some of Vermont’s cherished traditions: participatory democracy and the conservation ethic, from the ideas of George Perkins Marsh, one of America’s first environmentalists, to contemporary volunteer groups and activist movements. The film captures 21st century debates over natural resources, then circles back in time to show how these concerns originate in the ethics of farmers, who depended on the natural world for their survival. The disappearance of dairy farms has raised a tough question: how big is too big? How can Vermont survive in a world economy? Can Vermont be a model for small, local and self-sufficient farming?

Aug 31 (Sunday): Part 6 (Flood anniversary): Screening begins at 2 pm. Part Six tackles contemporary tensions over energy, independence, the environment and the state’s future. Chronicling the struggle to close the Vermont Yankee nuclear plant, it reveals the power of protest, the influence of lobbyists and the importance of town meeting debate and a citizen legislature. It follows the battle over windmills in Lowell—a struggle over scale, aesthetics and environmental impacts—and explores thorny questions about economics, sovereignty and climate change. Finally, the devastating impacts of Hurricane Irene reveal the power not only of nature, but of people and community. Lots of interviews of Cavendish residents in the Irene recovery segment.

Sept 14 (Sunday): Phineas Gage Walk and Talk, begins 2 pm at the Museum. The round trip walk is slightly less than 2 miles.

Oct. 12 (Sunday): Last day the Museum is open-Annual Cemetery Tour. This year’s tour will be to the Old Revolutionary Cemetery. Meet at the Museum at 2 pm.

CHS would also like to make “The Vermont Movie” available for  “home movie night” parties. You invite your friends, select the segments you want to watch (see list above) and a representative from CHS will come with the film and lead a discussion about Cavendish's history in the topics being explored. To make arrangements use the contact information on the newsletter header. 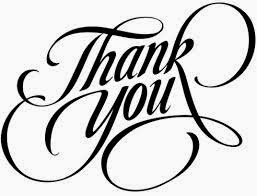 Do You Know Why It’s Called Hawkes Mountain?: It’s named after John Hawkes, a scout and officer with the British Army during the French and Indian War. He knew the Native American trails and was involved in prisoner exchanges to Canada. During the war, while leading a work party on the Crown Point Road, he is said to have encamped on a mountain, which is today part of Cavendish. 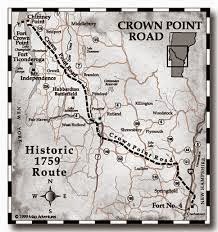 Crown Point Road End to End Hike
As part of the 255th Anniversary, there will be an End to End Crown Point Road (CPR) hike sponsored by the CPRA. Commencing at Marker NH#1 at 290 Main Street, Charlestown, NH. Participants will pass all seven NH markers, be ferried across the Connecticut River, and visit another three VT markers before stopping for the night at Ferguson’s farm, on Spencer Hollow Rd in Springfield VT.   Bring water, lunch and wear good footwear, for a walk of about 7 miles.  Becky Tucker will be the leader. For further information regarding the End - End Hike, Contact Becky Tucker at (802) 885-4686 or (802) 738-5579 (mobile). Additional details on overnight locations and daily routes will be posted to the CPRA website and Becky's Facebook page as they become available.

July 28th marked the 100th anniversary of the start of WWI. While the United States would not get involved for four  years, 57 men and one woman Mary Pollard, served from Cavendish. The following died in the war: George Dixon, Winthrop Boyle, Truman McNulty and Francis "Frank" Wallace


CHS Reconnects a Family
One of the most frequent requests CHS receives is for genealogy information. Therefore, when an e-mail from

California appeared in our inbox, it seemed pretty typical. The family could trace their ancestors back to the union of the Dutton and Proctor families and included the names of Spaulding and Parker. Did we have genealogies? Could we meet with them when they would be visiting in June? The answers were yes and yes. There was a less frequently asked question though, “were there possible descendants still living in the area that they could visit?”

At a CHS board meeting, the day before the scheduled visit, mention was made, since one of the board members is a Parker. “We’re having visitors on Tuesday that may be part of your family. If it turns out that they are, I’ll call you.”

Arriving at the Museum, the family was standing by the War Memorial. The man introduced himself, his wife and young sons. “My Dad is on that War Memorial,” he said. He went on to describe how his mother and father left Cavendish and moved to New Hampshire. Periodically they would come to Proctorsville to visit Aunts and Uncles. “Who knows if they were really relatives,” he said. Falling on hard times, the family ultimately moved to Florida, where both parents died in 1969. With no siblings or a knowledge of family, he was on his own at a young age.

A career as a leather artist took him to California in 1970, where he still lives. It was the birth of his sons that prompted his wife to start doing a genealogy search. “They might want to know where they came from,” she said.

A few questions about his Parker line confirmed that he was in fact part of the same family as CHS board member Gail Woods. As we stood in her kitchen, he tells Gail his mother's maiden name-Carmine June Cook. "I knew Carmine,” Gail replies. “ She had a son Greg Roche." To which he excitedly pointed to himself repeating, "that's me, that’s me!"

For the first time in 45 years he had met a member of his family. Not only were they cousins but Gail recalled playing with him and remembered he was a champion swimmer. Better yet, since Greg only had one picture of himself, and none of his parents, he was thrilled to hear Gail say, “I have pictures of you.”

While this alone would have been an amazing story, it gets better.

As Greg asks about names from his childhood, Gail pieces together that the Aunt Adie he remembered has a granddaughter-Janet Pipkin- now living in the old family home on Depot Street.

An e-mail and phone call, resulted in Janet’s posting the following to Facebook, What a night... Almost 50 years ago, my mom's cousin [Carmine June Cook] disappeared and cut ties with the family. So my mom never knew what happened to her and her son.

One of my strongest childhood memories is my mom always looking up their names in phone books whenever we were staying at a motel in another city. "You never know, they might be in here," she would say.

Today a man from California visited the Cavendish Historical Society to look up some family history, and thanks to Margo [Margo Caulfield is the coordinator of CHS] he not only got the history, he got the family! It is my mom's cousin's son. I got to meet him and we called my mom together.
Mom was so overjoyed to hear from him. She has wondered for so long how he was. And on Sunday, she will find out when she gets to see him again after all this time. Just amazing.

Being on speaker phone, we were treated to the reunion of Greg and Ann Pipkin, Janet’s Mom.

“We use to go to Arlington to visit Aunt Adie. I had an eye problem and we’d have to go to Boston...”

“Yes, I know all about the issues with your eyes. In fact, I probably know more about you than you do!”

As luck would have it, Janet’s family was having a reunion that weekend and Greg and his family were able to participate. Ann thought he looked like his Mom, Carmine, while Greg’s wife Sara, thought he resembled one of Ann’s sons. One thing was for sure, he had found his way home to people who knew and remembered him.

There are many things an historical society can do for its members and community but it’s beyond thrilling to give someone back the family they thought they had lost 45 years ago.

CHS Now on Pinterest
With more and more people using Pinterest, CHS has set up two boards: “Historical Cavendish”   and Researching Your Cavendish Family. If you aren’t familiar with Pinterest, the best way to describe it is that it’s a visual bookmarking and inspiration tool. 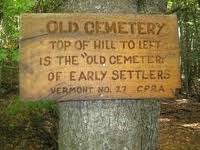 Thanks to the newest CHS board member, Kem Phillips, and his wife Svetlana, the Old Revolutionary Cemetery is getting a face lift this summer. The Phillips have been taking advantage of rainy days to clean all of the stones. The transformation is amazing. Consequently, it’s much easier to read the stones. This cemetery not only includes Revolutionary soldiers but also some of the early founders of the town, including Chubb and Tarbell. On Oct. 12, there will be a guided tour of the cemetery. Please meet at the Museum at 2 pm.

If you have not joined the Cavendish Historical Society, need to renew your membership, and/or would like to be a volunteer, please complete the form below and sending a check, payable to CHS, to CHS, PO Box 472, Cavendish, VT 05142. All contributions are tax deductible.


Posted by Margo Caulfield at 5:59 PM