Aug. 9 (Sunday): Cavendish Village Historic Walking Tour. Cavendish village is home to some of the oldest buildings in town-Academy Building (started in 1782); the Cavendish Historical Society Museum (1834) and the Cavendish Stone Church (1844). In addition, there is the boarding house where Phineas Gage was taken after the tamping rod went through head as well as the site where the Dutton House once stood. Now at the Shelburne Museum, it was believed to have been haunted and it seems the spirits have remained with the house, as many volunteers and staff at its current location prefer not to work in the building. In addition to the buildings noted above, other locations include Gay Brothers Mill, a history of stone buildings including Black River Health Center, Hickernell House (and no Mr. Hickernell is not buried in the basement), Stone Church (yes you can have a peak) and Spaulding House. Also included will be the Cavendish Cemetery and more. This is a little over a mile walk. 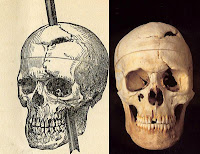 Sept. 13 (Sunday): Annual Phineas Gage Walk & Talk. We will walk to the site of the accident, approximately ¾ of a mile from the Museum, as well as visit the site of his boarding house and Dr. Harlow’s Surgery.

Oct. 11 (Sunday): From Smallpox to Covid-19: The Impact of Pandemics/Epidemics on the American Indigenous Peoples. This will be an outdoor presentation weather permitting. In the event of rain, the event will be held at the Cavendish Stone Church.

Nov. 8 (Sunday): Epidemics/Pandemics & Their Impact on History: This is a topic that many are interested in. The talk, which will be done via Zoom in collaboration with Okemo Valley TV, will combine the talks in July and October. There will be plenty of time for questions & answers. 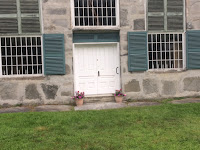 THANK YOU: If you’ve driven by and seen the changes to the front of the Cavendish Stone Church, be sure to thank Dave Gallagher and Ana for the incredible job they are doing scrapping and painting. We do need some type of scaffolding so they can reach shutters above the window. Anyone have some they can borrow? Note. Dave said based on the nails, as well as how they are numbered, he believes these were the original shutters.

Special thanks to our gardeners-Becky Plunkard for the flower pots in front of the Stone Church; Svetlana Phillips for tending the War Memorial and those gorgeous pot of geraniums in front of the Museum; and to our town crew for keeping the lawns mowed.

CARMINE GUICA YOUNG HISTORIANS PROGRAM: Covid-19 will make things a bit different this year, though we will be doing many outdoor programs in September and October. We are working with CTES teachers and home school families now to plan for the fall.

We are not forgetting our annual holiday for CTES. This year’s theme will be in honor of the Christmas of 1918-The Peace Christmas, also called the Forgotten Christmas. Between the flu pandemic and many soldiers still in Europe, even though WWI had ended in November, celebrating the holidays wasn’t a priority as it was in other years. Further, the country was in a recession. However, the government encouraged people to do early Christmas shopping and shopkeepers offered deals to make things a bit more affordable and enticing.

DO YOU HAVE A CAVENDISH HISTORY QUESTION? To teach our young historians how to be history detectives, we want them to have projects to work on. We will not being doing genealogy research, unless it directly relates to a specific question about a place or event. In short, no they aren’t going to research your Cavendish family for you, though we do have a website to help you do that.

NEW AT THE CHS BLOG
• Characteristics of Epidemics/Pandemics