Due to a snowstorm, the Cavendish Historical Society Annual Meeting, originally scheduled for Feb. 24, was cancelled and has been rescheduled for April 14 (Sunday), 5pm at Gethsemane Episcopal Church Parish Hall, off of Depot Street in Proctorsville. There will be a potluck supper, short meeting, and the film “The Homecoming” will be shown.  Documenting the two-month train journey across Russia, under taken by Aleksandr Solzhenitsyn upon his return home, Solzhenitsyn lived in exile for 20 years, including 18 years in Cavendish, VT. Solzhenitsyn, the man who experienced and revealed to the world the full horror of the Soviet gulag, is recognized throughout Russia as 'the conscience of the nation'. But despite the triumphant and emotional homecoming, this is no easy ride for Solzhenitsyn, his wife and American sons. Instead, they abandon their refuge in America to find their trans-Siberian trip from Vladivostok to Moscow dogged by the KGB, the Russian Mafia, old-style communist bosses, the tragic plight of ordinary Russians and the echoes of its even more terrible past.
Posted by Margo Caulfield at 4:37 AM No comments:

Aleksandr Solzhenitsyn, soviet dissident and Nobel Laureate for literature lived in Cavendish from 1976 to 1994. During this time, he wrote the “Red Wheel.” Because of the interest in his time in the United States, in 2012, the Cavendish Historical Society (CHS) began working with Solzhenitsyn’s family on a three-fold project:
• Maintain a permanent exhibit, whose primarily focus is the 18 years Solzhenitsyn lived in Cavendish VT.
• Obtain oral histories, archives and documentation pertaining to his life in Cavendish
• Outreach to community, including schools and organizations, in order to promote an understanding of Solzhenitsyn’s work and the role life in Cavendish played in it.

The future home of the Aleksandr Solzhenitsyn exhibit is the Cavendish Universalist “Stone” Church. 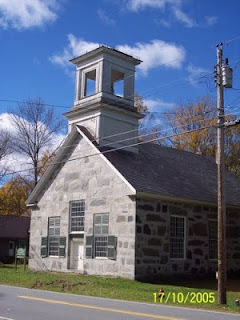 Under the leadership of Rev. Warren Skinner, a well-known abolitionist, the building was completed and dedicated in 1844. The construction was snicked ashlar. This technique refers to walls constructed with exterior and interior surfaces composed of mortared stone slabs arranged vertically on edge, tied together with smaller horizontal slabs called "snecks." The space between the wall surfaces was filled with rubblestone. Oral tradition indicates that Scottish stonemasons working in Canada were responsible for introducing the technique into Vermont. Buildings of this type date from 1832 to 1860. The stones used for the church came from local quarries.

While much of the interior of the church remains as built, it was equipped with power sometime after 1908. “New” wood burning stoves were added in the early 1900’s but it appears that the Church was primarily used in the summer months starting in the 1930’s and 1940’s. Decommissioned as a church in 1960, it was leased to the Cavendish Historical Society in the 1970’s and was added to the National Register of Historic Places in 1973.

On March 4, 2013, the citizens of the Town of Cavendish voted to accept the deed of the Church from the Vermont Quebec Universalist Unitarian Convention, which will be given to the town on May 11, 2013.

CHS is working with the Preservation Trust of Vermont on the restoration of the building.

Those wishing to help support this Solzhenitsyn Exhibit can do so by making a tax-deductible contribution to the Cavendish Historical Society and send to CHS, PO Box 472, Cavendish, VT 05142. CHS is a 501 © 3 non-profit.

Please check back for updates on the restoration of the church and the Solzhenitsyn Exhibit.
Posted by Margo Caulfield at 12:54 PM No comments:

The voters at Cavendish Town Meeting on March 4, overwhelming voted in favor of accepting the gift of the historic Universalist Stone Church from the Universalist Unitarian Convention of Vermont and Quebec. The building will have a multi purpose use-the home of the permanent Aleksandr Solzhenitsyn exhibit and a small venue for plays, concerts, lectures etc.
Posted by Margo Caulfield at 7:55 PM No comments:

The following videos are in English or have English subtitles.

Great Writers (48.41 minutes): Aleksandr Solzhenitsyn Presents the story of the writer’s life, as well as examines the social and political events that influenced their works. This program includes insightful commentary as well as archival documents and rare interviews.

Receiving the Nobel Prize for Literature (8:07 minutes): Although awarded in 1970, Solzhenitsyn could not claim it in person until 1974

The Freedom of Evil in America

Trilogy by Sergei Miroshnichenko Russian with English subtitles
Trilogy I: Live Not by Lies (56.09 Minutes) 2001
Trilogy II: On the Final Stretch (45.25 Minutes)
Trilogy III: The Word (57.44 minutes): 2009 Includes scenes from Solzhenitsyn’s funeral and his widow’s reflections.

In the First Circle (2007) Screenplay written by Solzhenitsyn. Last major work before his death, this is an eight part series.

Ignat Solzhenitsyn’s Lecture on "The Red Wheel: and Life in Cavendish

One Minute Per Day: Solzhenitsyn's Television program in Russia
Posted by Margo Caulfield at 8:37 AM No comments: