Letter from Russian Ambassador to the People of Cavendish

As part of honoring the 100th Anniversary of Solzhenitsyn's birth on December 11, 2018, a letter was sent to the People of Russia from the People of Cavendish. The letter, which was read at the Solzhenitsyn Conference in Moscow, reads as follows: 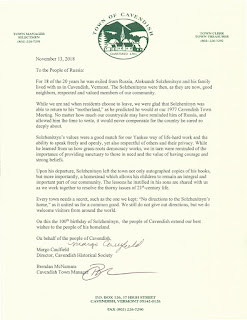 To the People of Russia:

For 18 of the 20 years he was exiled from Russia, Aleksandr Solzhenitsyn and his family lived with us in Cavendish, Vermont. The Solzhenitsyns were then, as they are now, good neighbors, respected and valued members of our community.

While we are sad when residents choose to leave, we were glad that Solzhenitsyn was able to return to his “motherland,” as he predicted he would at our 1977 Cavendish Town Meeting. No matter how much our countryside may have reminded him of Russia, and allowed him the time to write, it would never compensate for the country he cared so deeply about.

Solzhenitsyn’s values were a good match for our Yankee way of life-hard work and the ability to speak freely and openly, yet also respectful of others and their privacy. While he learned from us how grass-roots democracy works, we in turn were reminded of the importance of providing sanctuary to those in need and the value of having courage and strong beliefs.

Upon his departure, Solzhenitsyn left the town not only autographed copies of his books, but more importantly, a homestead, which allows his children to remain an integral and important part of our community. The lessons he instilled in his sons are shared with us as we work together to resolve the thorny issues of 21st-century life.

Every town needs a secret, such as the one we kept: “No directions to the Solzhenitsyn’s home,” as it united us for a common good. We still do not give out directions, but we do welcome visitors from around the world.

On behalf of the people of Cavendish,

On Christmas Eve, the Cavendish Historical Society received the following letter from Anatoly Antonov, Ambassador of the Russian Federation to the USA: 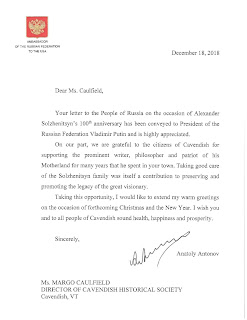 Your letter to the people of Russia on the occasion of Alexander Solzhenitsyn's 100th anniversary has been conveyed to President of the Russian Federation Vladimir Putin and is highly appreciated.

On our part, we are grateful to the citizens of Cavendish for supporting the prominent writer, philosopher and patriot of his Motherland for many years that he spent in your town. Taking good care of the Solzhenitsyn family was itself a contribution to preserving and promoting the legacy of the great visionary.

Taking this opportunity, I would like to extend my warm greetings on the occasion of forthcoming Christmas and the New Year, I wish you and to all people of Cavendish sound health, happiness and prosperity.

Posted by Margo Caulfield at 6:31 AM